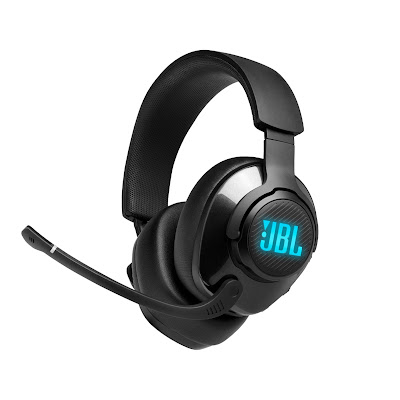 I used to think that winning in games is all about skills and strategies but I noticed that it’s not always the case during FPS games. I’ve been playing Valorant lately and one thing in particular that I discovered is that a regular headset isn’t enough anymore to play competitively. I used to play crossfire and I can say that almost any kind of headset works and you’ll be able to know exactly where your enemy is to get an advantage. The thing with Valorant is the footsteps aren’t as distinguished as I would like it to be when I was using a fairly regular headset. There would be times that I end up panicking because it sounds like I’m surrounded by enemies even though there’s only one person walking.

The JBL Quantum 400 isn’t exactly my first choice as I wanted to have wireless peripherals. I got it as a gift from my wife and actually wanted to swap it for the JBL Quantum 600 but wasn’t allowed to do so even though I haven’t unboxed it yet. I guess you could say that it’s a blessing in disguise because I gradually learned to love it. It could be just me getting used to playing Valorant but I noticed my gameplay getting a bit better and I think it’s because I’m now able to determine the sounds of my enemy’s footsteps better. The JBL Quantum 400 has what they call 3d Surround and positioning accuracy that really helps in shooter games.

My first impression of the sounds upon plugging the headset on my laptop is that it’s not as loud as I wanted and I thought it could be because of the quality of the sound but after playing a bit on its settings I got it set the way I want it. I no longer have to max the volume since it’s quite loud. Customizing the light effects is fairly easy where you can choose different colors, either steady or with breathing effect.

It comes with two detachable wires which I really like. One regular headphone jack and one USB type. I think all headsets should have detachable ones instead of a fixed wire. This way you can simply buy a new wire incase it breaks either from a normal tear or even when your pet chews on it. The headset foam feels very soft and nice on the ears even after hours of playing. Putting the mouthpiece up or down automatically mutes and unmutes but there’s a physical button that you can use to go on mute while the mic is down. There are two more physical buttons that are easy to access. One lets you adjust from gaming or video chat. The other one is for the volume. The headset itself is light in my opinion even though it might look big in pictures.

Audio SpecificationsFrequency response 20 Hz – 20 kHzMicrophone frequency response 100 Hz – 10 kHzMax input power 30 mWSensitivity 98 dB SPL @1 kHz / 1mWMicrophone sensitivity -40 dBV @ 1 kHz / PaImpedance 32 ohmMicrophone pickup pattern Directional
DimensionsMicrophone size 4 mm x 1.5 mmWeight 274 gCable length 3.5mm audio cable (1.2 m) + Type-C to Type-A Cable (3 m)Driver Size 50 mm Dynamic drivers
I mentioned that if given the chance I would have swapped this with the JBL Quantum 600 to get a wireless headset but I actually end up loving the Quantum 400. The wires are detachable so it still looks neat when I’m not using it. I also took into account how much I’ve been using the headset for games which is hours and hours weekly. Rechargeable wireless headsets normally only last up to 14 hours with the lighting turned off so I’ll most likely just keep it plugged in while gaming most of the time too.
The regular price of the JBL quantum 400 is ₱ 5,999.00 but we got ours for ₱ 3,749.00. They usually have it on sale on Lazada.